But it’s a circus of bloodthirsty vampires! Boo! 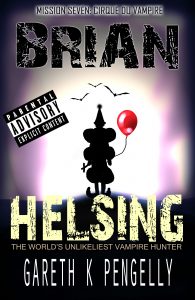 Big Top means Big Trouble when Brian learns that the Carnivale has set up shop right outside of Penzance. A mysterious organisation of vam

pires and other nocturnal ne’er do wells who, once a decade, travel for a year, donning clown clothes and riding unicycles, all in the name of entertainment, the Carnivale is usually a hallowed place, a neutral ground, where Helsings don’t hunt on the proviso that said vampires don’t hunt either.

But the fragile peace is shattered, when Brian learns that one of the mysterious Artefacts needed to stop Cthulu’s awakening lies in the possession of the Ringmaster himself.

And so, our brave – if reluctant -adventurer runs off to join the circus, donning his greasepaint in a bid to sneak into this nest of evil and steal the Artefact from right under Ravioli’s nose.

Join Brian as he faces challenges he’s never faced before:

All of these, and more, Brian faces, as he stumbles through another awkward adventure in Mission #7: Cirque du Vampire.

++Warning: This book contains crass and dark humour banned under the Geneva Convention. Even reading this book can get you arrested in several states. But if you wanna be a rebel and read it anyway, go ahead. We won’t tell.++