It was supposed to be just a dirty weekend away, Brian and Aimi, the Helsing 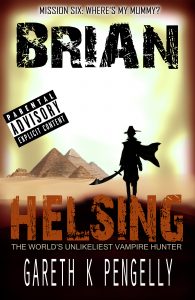 and the Oni-Hunter, enjoying a bit of sight-seeing, drinking and, more than likely, a little rumpy-pumpy in the Egyptian sun. Just a bit of simple fun, as his predecessor had often enjoyed, to take his mind off the looming Cthulu-sized problems on the horizon. And perhaps it would have been simple.

If it wasn’t for the mummies.

He should have expected it to be fair; wherever Brian trod monsters came crawling out from the woodwork. Such was his lot in life, as both the unluckiest guy in the world, whilst simultaneously being the Helsing, tasked with fighting supernatural horrors wherever they might be found.

But Brian had grown since that first day all those months ago. And when Imhotep the Sorcerer summons his undead hordes to bring the world into everlasting darkness, he reckons without a seriously pissed-off Brian and his ninja friend-with-benefits.

Brian did not pay for a five star room at an all-inclusive resort, only to be eaten alive by scarab beetles. Oh no. And so, without Bertha, without his weapons, and with very little idea what he’s doing, Brian goes full Helsing and really lets rip, taking his frustrations out in a non-stop, slapstick blood-bath of epic proportions.

Join Brian, at both his Helsingest AND his Brianest, in Mission #6: Where’s My Mummy?

++ Warning: this book contains scenes of idiocy that may offend those of a delicate, or even normal, disposition. Brian isn’t the hero we deserve. Nor, to be frank, is he the one we need right now. But he is a laugh, so there’s that. ++