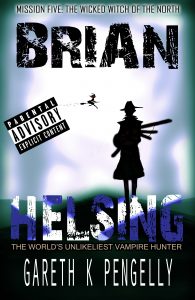 Not that he’s ever been there before, but Brian isn’t the type to let a lack of expertise stop him from making sweeping generalisations.

What he does know about Scotland, however, is that there’s a witch on the prowl. A baby-eating one, in fact, which on the Brian Scale Of Supernatural Nastiness ranks a pretty high 7.5/10.

With his girlfriend having left him for the arms of another woman, and his best mate Neil seemingly dead-set on throwing himself into harm’s way at every available opportunity, Brian has no choice but to charge headlong into this latest mission with all his customary lack of skill and bumbling idiocy.

Fresh hellish training at Heimlich’s hands, to prepare him for the possibility of magical combat. Fresh advice from the long dead XII.

And the fresh realisation that yet another mission is clearly going to go tits up, right from the off.

Red-haired, blue-skinned beauties who are not what they first appear. Psychopathic nuns with unsavoury habits. People who insist upon shouting at him in incomprehensible Scottish. Square sausages. Demons of his past conflicting with his duties of the present.

And the dawning knowledge that Brian, despite all his failings, is actually starting to change, and become more like his Helsing forebears than he would have ever thought possible.

++Warning: This book contains stereotypes, tropes, swearing, alcohol, and supernatural shenanigans up the yazoo. It is recommended to pair this book with a bottle of Doom Bar, or, if in Scotland, a pint of McEwan’s Champion.++