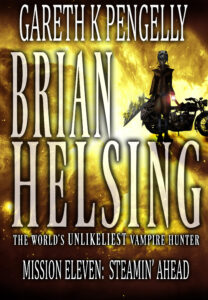 Six months after their very uneventful, almost yawnsome Antarctic expedition, Brian and co are back and ready for yet another snorefest adventure.

And snorefest it might seem, at first glance, at least.

Every year, Bunting-on-the-Wolds, a sleepy little village in the heart of rural England, holds a vintage Steam and Country Fair. Traction engines, classic motorcycles, tiny ponies and all manner of other pointless country pursuits. A sea of tweed and pipe smoke, hip replacements as far as the eye can see. Which, considering most of the guests have cataracts, isn’t that far.

At least they have beer tents.

Unfortunately one visitor is intent on ruining all the harmless, if eccentric, fun. A Satyr, a Greek nature spirit, follower of the god of wine himself, Bacchus, is set on converting people to hedonistic excess. And, given the average age of the guests is somewhere far, far north of eighty, that ain’t a sight anyone needs to see.

And so, Brian dons his leathers and begrudgingly sets out on a wobbly two-wheeled roadtrip to put a stop to the madness before it ends with various nethers getting split in twain by objects never meant to be inserted there.

Vampires! (Of course…)
Magicians!
Little, yappy dogs!
Pensioner sex! Okay, not quite. But very, very nearly.
Steam powered log-cutting machines!
Expositional flashbacks!
And a new, dangerous foe with tricks up his sleeve that even a Helsing can’t counter.

++ Warning – this book contains scenes of intense idiocy, not suitable for those of a sensitive nature. Oh, also there’s hints at, like, sex n stuff. And swearing. But in one of Brian’s books, that’s a given. Come on, this is book eleven. You should know this by now. ++