Horror novel. Meme. South Park cameo. Cthulu to many means any one of those things.

To poor Brian, however, that dread and difficult-to-pronounce name means only one thing: 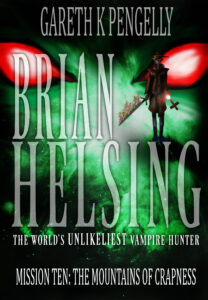 time to pack his boxer shorts and novelty-size travel toothpaste, next stop – Antarctica!

With the time fast approaching of the tentacle-faced Old One’s awakening, the race is on

to reach the Temple buried deep within the frigid wastes of the South Pole, ready to unleash the power of the gathered Artefacts and hit that squid-god’s snooze button. Because should Cthulu awaken… well. Bad things will likely happen. Like, y’know… really bad things. Remember how much it hurt when you woke up desperate for a pee the other night, then managed to stub your big toe on the bed frame as you stumbled to the bathroom in the dark?

Worse than that. Yeah.

Nightmarish trials await within the dank, dark depths, with dangerous lunatics abounding at every turn; fairies, vampires, homosexual German athletes and foul-mouthed Aborigines, all doing their best to confound Brian at every given opportunity – and that’s just his allies!

Will Brian AVOID soiling his kecks as the eldritch horrors of the Temple do their gribbly best to loosen his bowels? Will Friedrick ever stop drinking long enough to build something that WON’T blow up in Brian’s face? And precisely HOW does Heimlich keep his head so shiny and smooth? The answers to two out of three

of these questions are waiting for you within.

Oh – and also, will they prevent the end of the world? The eleventh book is coming out soon, so one would better bloody hope so…

Wrap up warm and join Brian and a score of friends as they face frog monsters, toothless beggars, weed-addled hallucinations and PENGUINS in Mission #10: The Mountains of Crapness.